The National Symbol of England

The red rose is the symbol of England. It comes from the history of the country.

This symbol goes back to the War of the Roses, which was the war within the country. In the 15th century two Houses were struggling for the English throne — the Lancastrians and the Yorkists.

The National Symbol of Scotland

For many centuries the purple thistle has been Scotland's national emblem.

There is a legend that explains why it became the Scottish emblem. According to that legend, ancient Scandinavians (the Norsemen) wanted to plunder* the land of Scotland and settle there. So, they landed on the east coast of Scotland. The Scots gathered their army to defend the land. They assembled behind the river Tay and made a camp to have rest after a long march. The Scots were sleeping and did not expect the enemies.

When the Norsemen decided to attack the Scots, they took their shoes off not to make noise. But one of the Norsemen stepped on a thistle. That sudden and sharp pain made him scream. So the Scots heard this "alarm" and put the Norsemen to fight. That is how the thistle became the emblem of Scotland.

The National Symbol of Wales

Wales has got two national symbols. These are the daffodil and the leek.

They are both connected to the Patron Saint of Wales.

According to the legend, during a battle against the Saxons, St. David advised his soldiers to wear leeks in their hats so that they could easily be distinguished from their enemies.

Another link between the leek and St. David is the belief that he had to live on bread and wild leek for several years.

However, today each year on St. David's Day the leek is worn in the cap badges of every soldier in every Welsh regiment.

But outside the army, many other Welsh people have substituted the leek by the daffodil, perhaps because it looks more attractive and certainly smells a lot better.

The daffodil is also associated with St. David's Day, due to the fact that it breaks into blossom on that day. Interesting to note that one of the many Welsh names for a daffodil is "Cenhinen Bedr" which means "Peter's leek".

The National Emblem of Northern Ireland.

The shamrock is the symbol of Northern Ireland. It is also connected to St. Patric, Patron Saint of Ireland.

Saint Patrick is most famous for bringing Christianity to Ireland. The legend tells how he used the shamrock, a kind of a white clover with three leaves to explain the Holy Trinity. Apparently, he used it to show how the Father, the Son, and the Holy Spirit could all exist as separate elements of the same entity.

The red hand is also a symbol of Northern Ireland. The Red Hand is in its flag. According to the myth, there was time when the heir to the throne of Ireland was undecided. And they decided to hold a boat-race and the winner (the first who would reach the shore of Ulster) would be the king. One competitor so much desired the country that when he saw that he was losing the race, he cut his hand, threw it to the shore and won. The hand is most likely red because it was covered with blood.

John Bull is the symbol of the typical Englishman. He is an imaginary figure and is shown in cartoons or pictures about England.

He was invented in 1712 by a Scottish physician and writer John Arbuthnot [ɑːˈbʌθnət].

John Bull is drawn as a big man with a large stomach and a round face. He wears high boots, an open jacket and a Union Jack waistcoat.

What animal is he often shown with?... Yeah, you’re right! He often has a bulldog with him.

During the Wars with Napoleon John Bull began to symbolize freedom, loyalty to the king. An average man, so to say, who would fight for his country.

Nowadays many British people still view the figure of John Bull as that of honest, generous, outspoken man, ready to stand up for his beliefs.

As for real John Bull, such a man did exist and he was an organist and he is thought to be the composer of the melody to the National anthem "God Save the Queen" which was found amongst his papers when he died.

*** There is another symbol that may represent the country as a whole — the bulldog. Just like John Bull it symbolizes tenacity* and force.

* an organist is a person who plays the organ.

"Britannia" is an ancient name of Great Britain that the Romans gave to it. It is also the name given to female embodiment* of Britain always shown wearing a helmet, sitting on a globe, holding a trident in one hand and an olive branch in an other leaning on a shield. She represents Britain as a victorious and maritime nation. The figure of Britannia has been on the reverse side of many British coins.

* a globe- the earth or the world is meant

"Jack" is an old word which means "sailor". It explains the name of the flag. King James III (1566-1622) ordered the Union Flag to be flown on the main mast of all British ships, except for the ships of war. So the flag was flown at the front of the ships. Union Jack is a mixture of several overlaid flags. It combines three flags representing England, Scotland and Ireland. 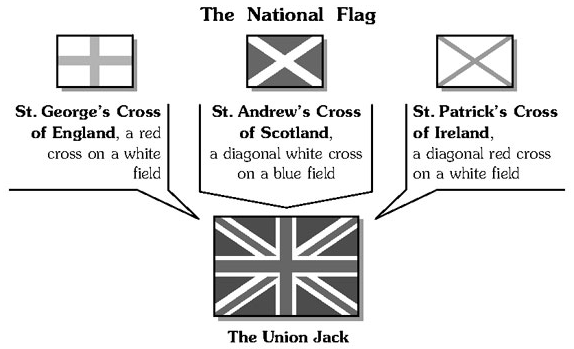